The NFT direction has kept the crypto industry in good shape for several years. It has evolved from funny cats into a global trend that responds to all market circumstances and user requirements.

We have all witnessed the birth of NFT gaming and its several cycles of hype. The most powerful impetus for the jump was the appearance of good Play to Earn model implementation, where enthusiasts could earn thousands of dollars by completing in-game tasks. Not surprisingly, this motivation attracted a lot of users and started a vast P2E craze, where projects claiming to develop a game received large trading volumes.

Their essence is approximately the same –  users need to buy in-game objects, resources, and various virtual items to start playing. The cost of these virtual items ranges from a few cents to hundreds of dollars, but you can buy them only with in-game currency. Then, users who have purchased the necessary characters and resources begin to compete with each other and complete tasks, receiving rewards in the form of in-game currency that can be converted into real money.

The idea of such games is excellent. It’s a win-win story for both game creators and players. However, the problem was that many of these games were not fun to play. Many of the early P2E games had rudimentary gameplay, basic graphics, and nothing more than rewards. The biggest challenge has always been user attraction and retention. And as soon as the crypto market bounced into the red zone in 2022, many P2P games focusing only on earning rewards began to lose users rapidly. When the game is not very fun, and players are kept only by receiving crypto rewards against a falling market, the attraction steadily goes to zero.

Investors in 2023 are looking for more than clone NFT games

Thus, the current Play to Earn games are only a transitional stage, a link in the evolution of the entire gaming industry because it is impossible to exclude the NFT influence on the global gaming market. Already, unique NFT-based games are emerging that focus on gameplay and appeal to traditional players. They combine the best traditions of WEB 2.0 games and WEB 3.0 technological possibilities.

Investors in 2023 are looking towards something other than clone NFT games with only promises and cute websites. Now everyone is thinking about the players, the gameplay, and how to keep users from getting bored, immersing them in a unique world that captivates them for a long time.

Using the example of the Chainers project, which is powered by Polygon, you can trace an improved model for creating NFT games. The team’s mission is to create a fascinating and addictive gameplay that will make Chainers stand out from other NFT games. Crypto game creators are interested in emotional connection with their players and develop strategies based on the users’ interests. In this context, NFT gives much more than just a few cents from some NFT elephant. 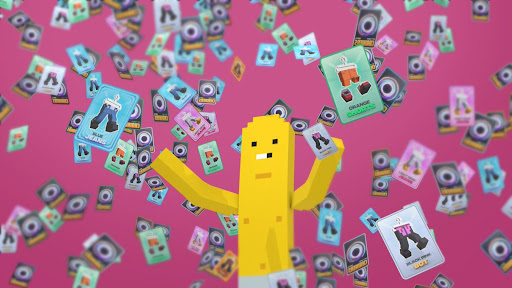 Chainers is a crafting story based on the creative economy and a fancy design, which traditional players worldwide appreciate. Players don’t need to buy their first asset to explore their adventures. The free-to-start concept immediately removes the barriers and lets them into the unique world of NFT gaming, which includes full self-expression, rich design, the ability to play by your own rules and get tremendous pleasure from completing various tasks. The team is on track with their roadmap and has already implemented several features that scale the Chainers community. The developers’ task is to provide value to the players already at the first release stage and not to make them wait until the long process of developing the game is completed.

With Chainers, every day feels like Christmas, but Santa brings NFTs 🎁

Have you got yours today?A rare top 👕, a legendary hat, or just a common pair of jeans? 🤔

In addition to the free NFT avatar, the community is attracted by the daily NFT free giveaways that provide unique assets to upgrade the character. In the near future, players will also have an AR feature with which everyone can let out their Chainer into the real world. Of course, the NFT game will include a marketplace and its own tokens, but the main release is the Chainers MMO game. It is worth noting that Chainers already has a strong community of more than 60k members. It consists of creators, musicians, artists, and other NFT enthusiasts. They united by a joint mission – to create their new world, get unique skins for their characters, and unleash their creativity by participating in grandiose events with crypto prizes.

Fun defeats the volatile nature of the crypto market and becomes a driver for the development of NFT gaming.

The gaming industry has always been at the forefront of technological innovation, and NFT-enabled games are no exception. This direction is rapidly developing, growing, and changing people’s attitudes toward digital assets and creativity. The future of NFT is a world of colourful ideas. Although technology is constantly improving and is already very different from basic projects, this sector is becoming more significant.