Data shows the Bitcoin spot trading volumes have sharply risen alongside the rally, a sign that this momentum might be sustainable.

As per the latest weekly report from Arcane Research, the current trading volume highs haven’t been observed since the collapse of the crypto exchange FTX back in November of last year. The “daily trading volume” is an indicator that measures the total amount of Bitcoin being transacted on the Bitwise 10 exchanges on any given day.

While the metric may only account for volumes on the Bitwise 10 exchanges, the activity measured by it still provides a decent idea about the trend being followed by the wider spot market.

When the value of this indicator rises, it means a large number of coins are being transacted on the spot market right now. Such a trend suggests traders are active currently.

On the other hand, low values imply the BTC market isn’t seeing much activity at the moment. This trend can mean the general interest in the cryptocurrency among investors is low currently.

Now, here is a chart that shows the trend in the 7-day average daily Bitcoin trading volume over the past year: 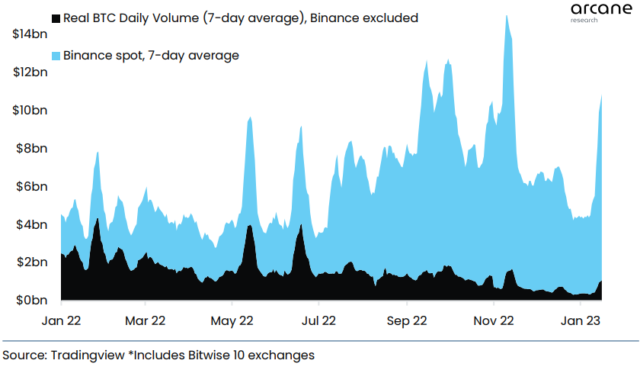 As displayed in the above graph, the Bitcoin daily trading volume has observed some rapid rise in the last week or so, as the BTC price has rallied. The 7-day average value of the indicator has now hit $10.8 billion, a high that hasn’t been seen since the FTX crash.

In total, the surge in the metric’s value has amounted to 114% over the past week, a very significant uplift. From the chart, it’s apparent that Binance still accounts for the vast majority of the activity, as its trading volume currently stands at $9.8 billion. The crypto exchange first started dominating the market in terms of volume back when the platform removed fees on its Bitcoin trading pairs.

The rest of the exchanges are seeing very little volume recently, which led to low revenues for many of them and caused them to go through new rounds of restructuring. The most notable example would be Coinbase, which had to cut 1,000 of its staff just a few days back.

With this latest rise in market activity, however, the collective volume of exchanges other than Binance has surged to about $1 billion, something that these platforms would probably find encouraging amid these times.

The fact that these high trading volumes have come alongside the Bitcoin rally could be a positive sign for it. As in the past, all significant price moves have usually been accompanied by a surge in activity.

The reason behind this is that rallies like these require a large number of traders to keep the fuel going. As the current rally is enjoying large trading volumes, it could be sustainable for a while still. 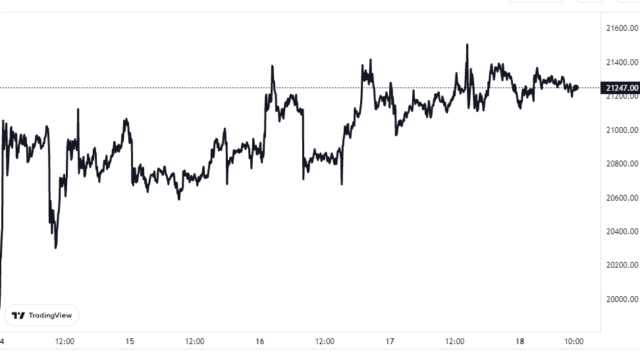