Ankr Network token jumps 6% to resistance. What could happen next?

Ankr Network (ANKR/USD) witnessed increased investor interest on Thursday, pushing the token up 6%. The gains reflected positive cryptocurrency news. Attention will not shift to whether the token will sustain gains as it hits a key resistance level.

Ankr is a platform that provides access to the decentralised internet. The network aims to eliminate the barriers to entry to the blockchain by decentralising control to users and developers. To achieve this objective, Ankr provides simple tools and interfaces for Web3 development. ANKR is the native token that powers the ecosystem and helps in on-chain governance.

Thursday’s gains of ANKR token came after becoming the first Remote Procedure Call provider for the Sui blockchain. The announcement on November 22 indicated that Ankr would let developers create and upgrade dApps on top of Sui. Ankr will also support the Sui mainnet after it goes live. There is additional expected support for docs, tools, and features for the Web3 developers. The partnership also opens opportunities for geo-distributed and decentralised RPC for Sui.

The latest announcement also coincides with the increasing growth of Ankr staking. According to the network’s November 23 Twitter post, more than 56,000 ETH has been staked with Ankr staking. The developments have since fueled increased speculation for the network’s native token.

ANKR faces correction at $0.026 despite the intra-day surge 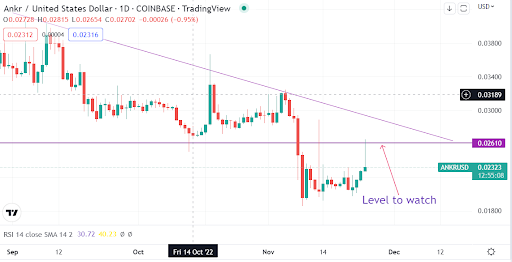 Despite the intra-day gains, ANKR has met resistance at $0.026. The cryptocurrency is correcting, resulting in a potential bearish pin bar below the key level. Besides, the long-term trend for the token is bearish.

When to buy ANKR?

ANKR is not yet a buy despite a positive price action. A recovery from the bearish market will be confirmed if the cryptocurrency breaks above the $0.026 support. Buyers will still need to be cautious of a retracement at the descending trendline.

On the flip side, the formation of a bearish signal below the key support would make ANKR vulnerable. A price back to the $0.019 support or lower would be in sight.

Where to buy ANKR

Coinbase is a global cryptocurrency exchange. Its platform is well designed for beginner investors and it offers a wide range of coins, as it has over 100 to choose from. Coinbase has high level security built into the platform, a range of diverse features to use and it offers its users options for storing their crypto, such as being able to store coins on the Coinbase exchange.

The post Ankr Network token jumps 6% to resistance. What could happen next? appeared first on CoinJournal.