Football and crypto – Argentina’s fan token halves in value. Should you buy it now?

As the Argentina football team opened its World Cup match on Tuesday against Saudi Arabia, expectations were high. Argentina were clear favourites, boasting of a star-studded team captained by seven times ballon d’or winner Lionel Messi. The match ended in a shock loss, 2-1, with Messi & Co. only to save face in a packed stadium of bewildered fans. The loss took little time to infiltrate into crypto.

Argentine Football Association Fan Token (ARG/USDT) traded at $7.6 before kickoff. It fell sharply to $4.6, indicating how much Football speculations are getting intertwined into cryptocurrencies. Traders are using soccer-related tokens to bet on the success of their favourite teams. Days before Argentina’s match, ARG had peaked at $9.2. As of press time, the token exchanged hands at $5.58, a nearly half price. Is the token a buy on the dip?

Of course, the World Cup is continuing, and the Argentina soccer team will have a chance to redeem itself. The game on November 26 will give fans a chance to gauge the team once more. A strong performance will reassure fans and uplift ARG and vice versa. A bet on the token could return big on a positive outcome.

ARG is attempting recovery above the $4.5 support zone 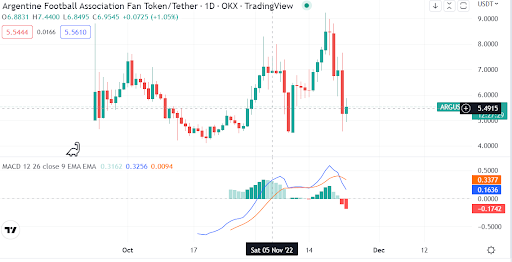 Technically, momentum has turned bearish for the ARG token. The MACD indicator remains in the bullish zone. ARG is attempting recovery since nearing the $4.5 support. However, the upside lacks momentum.

Should you buy ARG now?

ARG has kept the $4.5 support to signal that it has not entered a lasting bearish market. The token can go higher if fans maintain above the key level.

Nonetheless, it should be noted that ARG price is driven by on-field factors and speculations. It is nearly impossible to tell with 100% accuracy that the on-field events will be positive to boost ARG.

Buying ARG now is, thus, very speculative. It could return big and can cause losses too. $4.5 is the level to watch if intending to speculate on the soccer fan token.

Where to buy ARG

The post Football and crypto – Argentina’s fan token halves in value. Should you buy it now? appeared first on CoinJournal.