D-Day Looms For Bitcoin – Are DCG And Genesis Going Bankrupt?

The question of whether Genesis Trading and Digital Currency Group (DCG) will go bust currently hangs over the crypto and Bitcoin market like a sword of Damocles. In the event of bankruptcy, DCG could be forced to liquidate its cash cow, Grayscale and its Grayscale Bitcoin Trust (GBTC).

But, how likely is that to happen? To answer this, it is extremely important to understand what the three companies are, how they are related, and what obligations they have to each other. In addition, let’s take a look at the rumors that have been circulating in recent days and try to determine their veracity.

Why Could Today Be a D-Day For Bitcoin?

DCG is one of the most important companies in the crypto industry and the parent company of numerous well-known crypto firms, including Genesis and Grayscale.

Genesis is the only full-service prime broker in the crypto space and has been a jewel in DCG’s portfolio. The company plays a critical role in providing access and managing risk for large institutions.

Nevertheless, it was already floundering after the collapse of Three Arrows Capital (3AC) and was rescued by DCG. The parent company is now a $1.2 billion creditor of 3AC.

Genesis announced late last week that it would suspend payouts for its Genesis Earn program. As a result, it was revealed that the company would need a $1 billion cash infusion by today, Monday.

If Genesis is unable to raise this amount from external backers, things could look bad for DCG and, by extension, Grayscale, according to rumors. The Grayscale Bitcoin Trust currently holds 634,000 BTC that could reportedly be liquidated, putting massive selling pressure on the Bitcoin market.

One of the main sources for the current rumors is Andrew Parish, co-founder of ArchPublic. He claims that there are “zero interested parties” for Genesis.

**Genesis creditors are preparing for an ‘imminent’ bankruptcy filing.

How legitimate this source is, however, is being questioned in the crypto community. Analyst Dylan LeClair expressed his doubts ad advised to take this guys sources with a grain of salt.

No idea if this guy is just making stuff up or not, but at this point, absolutely nothing would surprise me.

Take this guys sources with a grain of salt, but… Where there's smoke, there's often fire.

Assuming Genesis does indeed fails to attract capital, DCG could be forced to sell equity and some of its portfolio. Adam Cochran, a partner at VC firm Cinneamhain Ventures, has been scrutinizing DCG’s assets to assess whether it could close the $1 billion hole on its own.

DCG could try to sell the companies in its portfolio, including Luno, Foundry and Coindesk, as well as a substantial venture portfolio. However, Cochran believes that $1 billion is very optimistic and said, “as a VC, there’s not much I would bid on with a secondary.”

So I'd guess we're looking at something like this for a breakdown.

These are ballpark figures, from the outside, but it will give us a gauge of what their venture portfolio could look like. pic.twitter.com/loH4mMiznG

Cochran went on to explain that Grayscale, Genesis and Luno – in that order – are likely to be DCG’s highest priorities. So to get to $1 billion, they would have to sell some of the equity, all their ventures, all of the liquid assets, and Luno/Coindesk/Foundry (if it has any value), according to Cochran.

Ultimately, DCG would have to throw everything overboard to save its golden goose. Only if this fails, a liquidation of the Grayscale Bitcoin Trust would be on the table.

My guess is that if we get news this week other than they closed a round, then that means most of this stuff will get sold off. And if they can’t get the raise in time, then they’d have to look at spinning off Grayscale itself.

But even this might not be easy. Admittedly, Grayscale has already dissolved its XRP trust in the past. However, this was in light of the US Securities and Exchange Commission’s lawsuit against Ripple Labs.

QCP Capital noted in its latest report that “those expecting GBTC to allow a one-off redemption for Genesis to meet liquidity needs are misguided, as this has to be done with the SEC’s approval.” Given the SEC’s opposition to GBTC this year, QCP Capital does not expect that to happen anytime soon.

Ram Ahluwalia, CEO of Lumida Wealth Management, meanwhile, assessed that “the right move for Genesis is an acquisition.” Potential acquirers could include GS, ICE or a consortium of investment banks. Ahluwalia stated:

That won’t be easy – headline risk, regulatory scrutiny, questions about asset quality, risk-off climate, etc. (MS, Merrill, CS, Deutsche, and Jefferies would not do this for various reasons).

If there is no acquirer, DCG would have to plug the hole, which Ahluwalia believes it will not do because the business is not profitable. “That would mean an organized bankruptcy of the Genesis credit subsidiary,” he said.

At press time, Bitcoin investors seemed highly unsettled and in a de-risk mode. The Bitcoin price dropped to $16,000, close to the bear market low of $15,675. 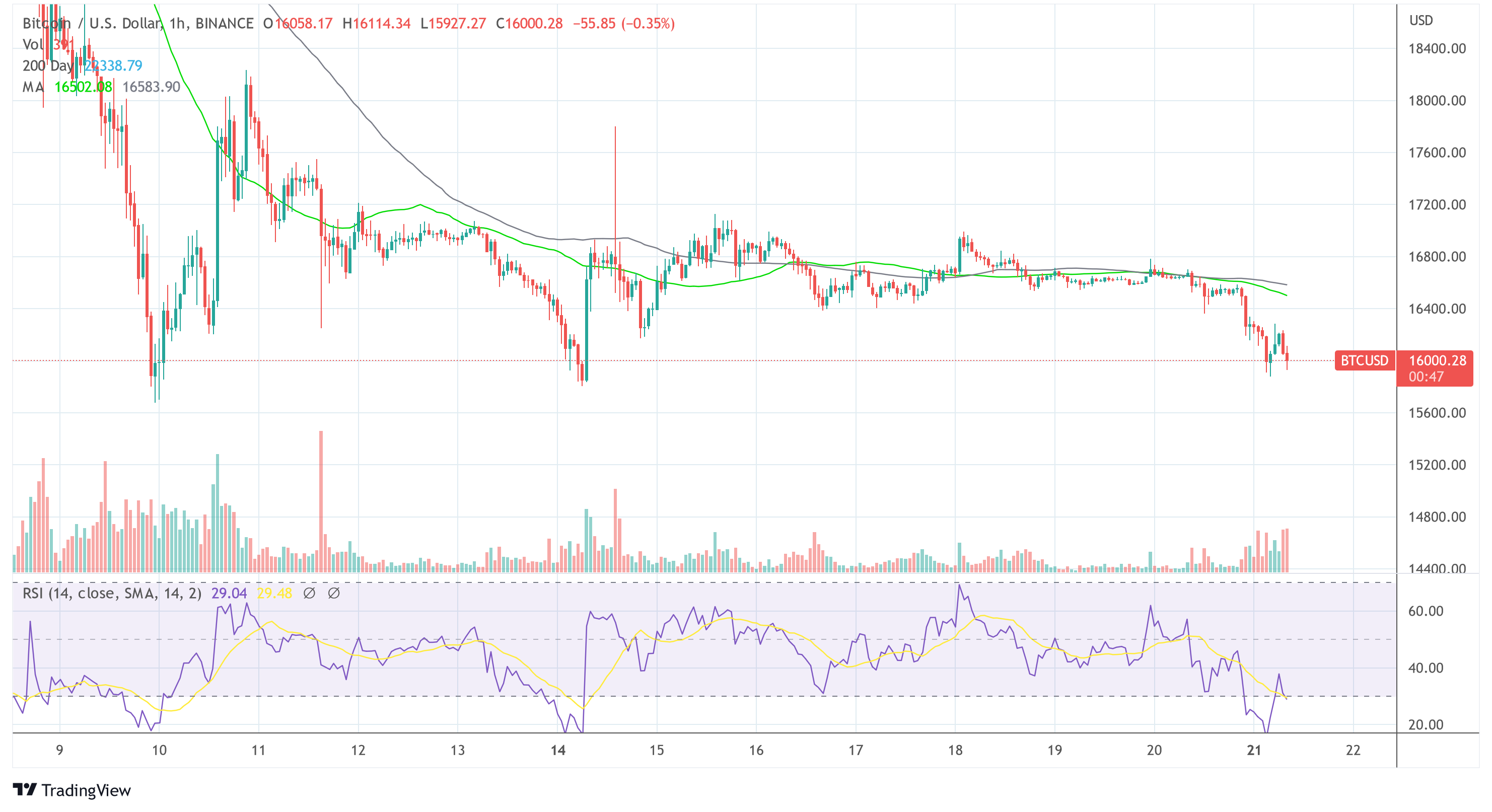