How bad is this UST depeg for Terra and crypto? It’s bad, but not necessarily bad for everyone…

Good chance that this entire mess has been engineered from legacy finance and business banks to get their cut of it. 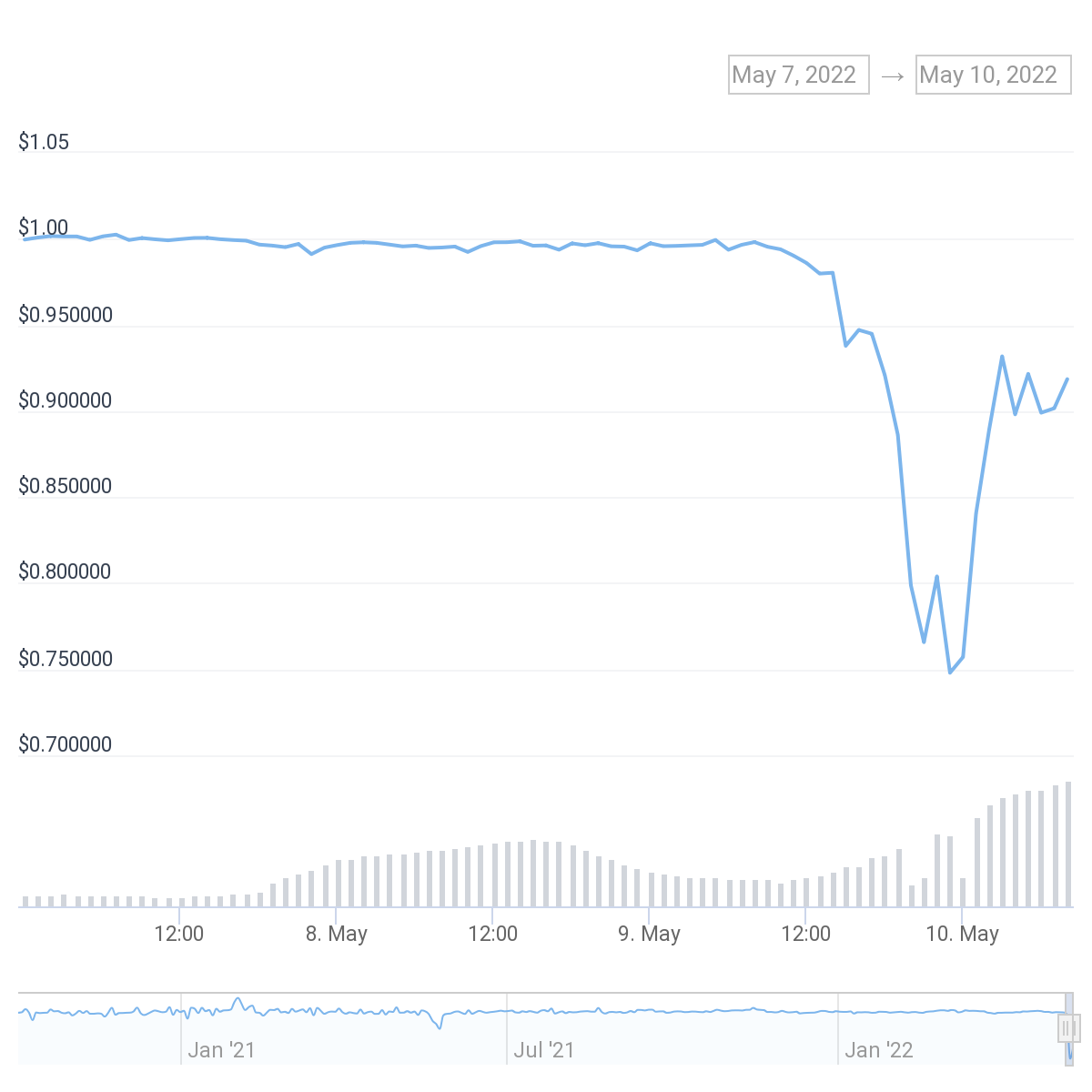 Terra’s native stablecoin UST lost its 1 dollar USD peg after a cascade of withdrawals, liquidations, and — possibly — a coordinated attack. The supposed stablecoin fell as low as  $0.65 USD, but it has since “recovered,” and trading in the $0.93 range.

The recovery is likely due to the Luna Foundation fronting UST a 1.5 billion dollar loan, as well as Binance doing them a solid and suspending withdrawals temporarily — they have since been reinstituted.

Theories abound about what exactly caused the catastrophic depegging. Whatever it was, or whatever combination of things led to it, it’s not a good look.

Terra is in a tough spot now thanks to UST. But it’s not all bad for everyone in crypto. It’s not all good either, thought. Let’s take a look at who surprisingly benefitted and who is up stablecoin creek without a paddle.

I thought about going with arbitragers, but I worried people would pronounce the second part of it like “ragers.” Arbitrage, as you might know, is the art of buying an asset at a lower price than that you sell it at. It was made famous in crypto circles thanks to the “Kim chi” premium, where traders would sell Bitcoin on Korean exchanges that had a higher price for BTC. This time around savvy traders were buying UST on exchanges and redeeming at Terra station for a full dollar — hence the Binance pause on withdrawals. Get that money. However cynically.

Honestly, everyone hates on USDT, but I can’t think of any entity that’s come out of this looking better. USDT, which is an old-fashioned stablecoin built on half-truths, and IOUs, has yet to lose its peg to the downside like UST. It fell as low as 0.93 cents back in 2017, but overall, it’s withstood bear markets, China FUD, and everything between without crumbling like UST did last night.

Can’t think of a better argument for regulating stablecoins than what happened yesterday. That said, old fashioned stablecoins backed by the spoils of child labor and destabilizing African countries aren’t going to draw the regulatory ire. Thanks to the differentiation, and it’s cozy relationship with members of congress, USDC is looking like its in better and better shape as the U.S. inches — and I do mean inches — toward regulating the industry.

To be fair, the majority of the crypto ecosystem is at fault here. There was a lot of cheering on of Terra’s aggressive BTC buys. Nonetheless, Terra is definitely in a pinch now. Their LUNA token is down almost 50% in the last 24 hours, and over 60% in the last 7 days. There’s a lot that has to be done to rebuild trust.

Though, crypto tends to have a short memory. Remember when THORChain was hacked multiple times? It’s recovered since. What about all the various scandals and FUD attacks with Cardano? They’ve recovered every time. This isn’t good, but it’s not a death sentence.

It’s gonna be real hard to trust an algorithmic stablecoin again. To be fair, not all of them are constructed the same way, and UST’s is definitely the most aggressive one thanks to its overreliance on Anchor Protocol and aggressive BTC buys. An example of a more reasonably thought out algorithmic-like stablecoin is Maker DAO’s DAI (DAI dispute the label). It uses Ethereum smart contracts to achieve its dollar peg, but it still has the collateralized assets when needed. DAI, during last night’s madness, maintained its dollar peg.

This one might seem surprising, but if you think stablecoins are wack, UST’s depeg is hardly a proof of concept. You’d have to be pretty smoothbrained to believe the risks associated with say Pax’s stablecoin, which is 94% backed by USD, and Terra’s aggressive approach with BTC. Of course, that hasn’t stopped the professional class of crypto FUDders to do their painfully oblivious thing. Poor Bitfinex’ed is still holding out hope he will be right eventually…

The only difference between UST and USDT, is that we know what cards UST is holding.

Tether doesn't tell us what cards they hold, because they know it's crap, and will suffer the same fate as UST.

No, that’s not the only difference.

Recommended: Rumors That Celsius Network Received A Billion Dollars Worth Of “Emergency” Tether Are False